My conferences in Novosibirsk and Baska (on the isle of Krk in Croatia) are over and I am in Zagreb for a couple of nights before my flight home. Novosibirsk is in the middle of Russia, the largest city in Siberia and third largest in Russia itself. It straddles the Ob river, one of the longest in the world, and was built largely to support the Trans-Siberian railway bridge built more than a century ago across the river. 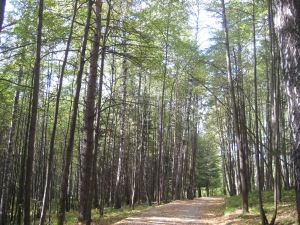 A typical walk in the Academic town between Institutes

The Geometry conference was held in a satellite suburb called something like “Academic Town” in Russian: a sprawling complex of Scientific Institutes set in a forest, with pleasant walking paths through the birch and pines. The northern forest reminds me of Canada, and so I enjoyed the walks I took, several with my new young friend Maxim, a student of Alexander Mednykh, the mathematician who had invited me. 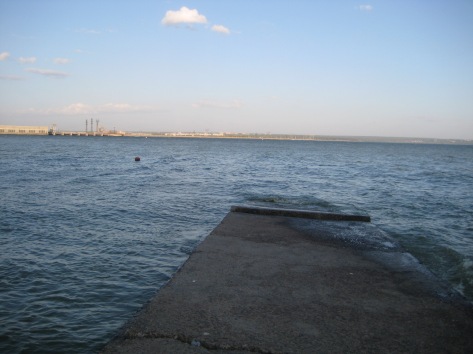 The Ob sea: man made reservoir outside Novosibirsk

Maxim showed me the Botanical Garden and local Russian Orthodox church, all in wood, set amongst the trees, as well as the Ob sea/reservoir, an impressive man-made lake which is hard to see across it is so big.

Sasha Mednykh and me in downtown Novosibirsk

Alexander and his son Ilya took me on a nice walking tour of Novosibirsk itself, showing me the theatre, train station, some interesting squares, and even a semi deserted fair with a Ferris wheel we took a ride on, to get a good view of the Ob and the longest subway bridge in the world over it.

I stayed in a pleasant student dorm which had a few floors acting as a hotel: there were not a lot of accommodation options. The weather was lovely, end of summer warmth and blue skies.

The conference itself was fun, particularly the dinner with lots of toasts, of which I gave one! I met some interesting people; one of my neighbours was from distant Yakutsk, a name familiar from years playing Risk, but of which I know rather little, and he told me about life there. Evidently the permafrost spews out slabs of ice from the ground erratically in places, even in the middle of the summer!

I also had some good mathematical discussions, one in particular with I. K. Sabitov from Moscow, who had proven the lovely theorem that given a polytope in three dimensional space, there is an algebraic equation satisfied by the volume whose coefficients depend only on the quadrances (squared lengths) of the edges. However for complicated polytopes this polynomial can be exceedingly large. (For a tetrahedron the relation goes back to Tartaglia, and it was also discovered by Euler.)

A view from Novosibirsk

One small aspect of Russian life perhaps worth retelling: in the small minibus that Maxim and I took to go into the city, passengers pass up their fares to the driver hand to hand via other passengers, even from the back, till it gets to the driver. He dispenses the various lots of change and it snakes its way back, each person taking the amount due him/her, passing the rest on. Can I imagine this happening in a big city in Australia or America? Not really, to tell the truth. It says something about the level of trust people have with strangers. Perhaps an aspect of the `quality of life’ that doesn’t get as much attention as it should.

Downtown Novosibirsk: The center of Russia

Alexander Dimitryovich, as he is known by his students and colleagues (Russians use the first two names as a sign of respect, and the second name is that of the father) has a small office which is quite often full of students, so there is almost no room to turn around. There was a nice feeling of working together there, and I had some chance to exchange some interesting thoughts about hyperbolic geometry, a subject I have developed a deep interest in. (My Rational Trigonometry extends to the hyperbolic setting, and gives a rather new, and of course exciting, view of this classical subject.) I was happy that Alexander Dimitryovich was willing to entertain using my algebraic reformulations to make some computations.

So… I am eager to go back to Siberia. Next time I will perhaps try to stay a bit longer, and get further out of town, perhaps to the Altai mountains which are not so far away.