When does ideology trump common sense?  This question is very relevant to the sad situation with modern pure mathematics, which is in a dire logical mess. All manner of dubious concepts and arguments are floating around out there, sustained by our fervent desire that the limiting operations underlying modern analysis actually make sense. We must believe — we will believe!

And there is hardly a more obviously suspicious case than that of space-filling curves. These are purportedly one-dimensional continuous curves that pass through every (real) point in the interior of a unit square.

But this contradicts ordinary common sense. It imbues mathematics with an air of disconnection with reality that lay people find disconcerting, just like the Banach-Tarski Paradox nonsense that I talked about a few blogs back.

In mathematics, dimension is an important concept; a line, or more generally a curve, is one-dimensional, while a square in the plane, or a surface is two-dimensional, and of course we appear to live in a three-dimensional physical space. But ever since the 17th century, mathematicians had started to realize that the correct definitions of “curve” and “surface” were in fact much more subtle and logically problematic than at first appeared, and that “dimension” was not so easy to pin down either.

In 1890 a new kind of phenomenon was introduced which cast additional doubt on our understanding of these concepts. This was the space-filling curve of Peano, which ostensibly fills up all of a square, without crossing itself. This was a contentious “construction” at the time, resting on the hotly debated new ideas of George Cantor on infinite sets and processes. But the influential German mathematician David Hilbert rose to defend it, and so generally 20th-century pure mathematicians fell into line, and today these curves are considered unremarkable, and just another curious aspect of the modern mathematical landscape.

But do these curves really exist? More fundamentally, are they even well defined? Or are we talking about some kind of mathematical nonsense here?

While Peano’s original article did not contain a diagram, Hilbert in the following year published a version with a picture, essentially the one produced below, so we will discuss this so-called space-filling curve of Hilbert. It turns out that the curve is created by iterating a certain process indefinitely. Along the way, we get explicit, finitely prescribed, discrete curves that twist and turn around the square in a predictable pattern. Then “in the limit”, as the analysts like to say—as we “go to infinity”—these concrete zig-zag paths turn into a continuous path that supposedly passes through every real point in the interior of the square exactly once. Does this argument really work??

The pattern can be discerned from the sequence of pictures below. Consider the square as being divided into 4 equal squares. At the first stage we join the centres of these four squares with line segments, moving say from the bottom left to the top left, then to the top right, and then to the bottom right. This gives us a U shape, opening down. Now at the next stage, we join four such U shapes, each in one of the smaller sub-squares of the original. The first opens to the left, the next two open down, and the last opens to the right, and they are linked with segments to form a new shape, which we call U_2 as shown in the second diagram. In the third diagram, we put four smaller U_2 shapes together, also oriented in a similar way to the previous stage, to create a new U_3 curve. And then we carry on doing the same: shrink whatever curve U_n we have just produced, and arrange four copies in the sub-squares oriented in the same way, and linked by segments to get the next curve U_{n+1}. 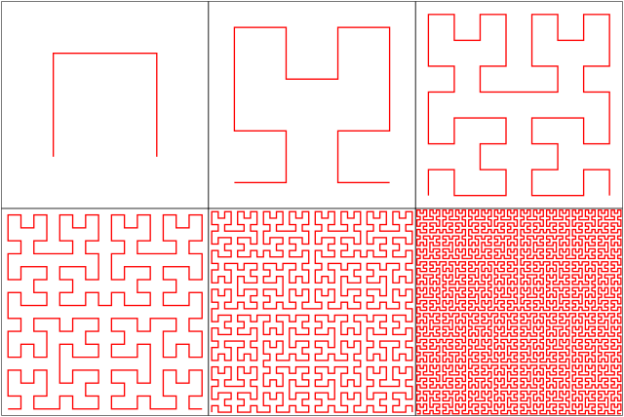 These are what we might call Hilbert curves, and they are pleasant and useful objects. Computer scientists sometimes use them to store date in a two dimensional array in a non-obvious way, and they are also used in image processing. Notice that at this point all these curves are purely rational objects. No real number shenanigans are necessary to either define or construct them. Peano and Hilbert made a real contribution to mathematics in introducing these finite curves!

And now we get to the critical point, where Hilbert, following Peano and ultimately Cantor, went beyond the bounds of reasonableness. He postulated that we could carry on this inductive process of producing ever more and more refined and convoluted curves to infinity. Once we have arrived at this infinity, we are supposedly in possession of a “curve” U_{infinity} with remarkable (read unbelievable) properties. [Naturally all of this requires the usual belief system of “real numbers”, which I suppose you know by now is a chimera.]

(Legal Disclaimer: these real numbers are for illustration purposes only and do not necessarily correspond to reality in any fashion whatsoever. In particular we make no comment on the meaning of the three dot sequences that appear. Perhaps there are oracles or slimy galactic super-octopuses responsible for their generation, perhaps computer programs. You may interpret as you like.)

The infinite Hilbert curve U_{infinity} cannot be drawn. Its “construction” amounts to an imaginary thought process akin to an uncountably infinite army of pointillist painters, each spending an eternity creating their own individual minute point contributions as infinite limits of sequences of rational dots. Unlike those actual, computable and constructable curves U_n, the fantasy curve U_{infinity} has no practical application. How could it, since it does not exist.

Or we could just apply the (surely by now well-known) Law of (Logical) Honesty, formulated on this blog last year, which states:

While you are free to create curves U_n even for very large n if you have the patience, resources and time, it is both logically and morally wrong to assert that you can continue to do this for all natural numbers, with a legitimate mathematical curve as the end product. It is just not true! You cannot do this. Stop pretending, analysts!

But in modern pure mathematics, we believe everything we are told. Sure, let’s “go to infinity”, even if what we get is obvious nonsense.

9 thoughts on “Space-filling curves do not exist”